Karma is an attribute both in YGGDRASIL the DMMO-RPG and in the New World. Originally, it affected various mechanics in YGGDRASIL, such as influencing the damage of certain spells or abilities [1], dictating AI actions in certain situations [2], and dynamically targeted by items [3] or mid-battle for certain strategies.

In the New World the mechanical aspects still apply, as abilities and items related to karma still work as they did in YGGDRASIL [4] [5]. One difference is Karma now affects decision making to some extent, though Ainz is an exception to this [6]. The system where karma changes based on actions also still exists [7].

Based on the character sheets you can deduce that there are breaks at karma value that separate each rating. This is my attempt at trying to understand it from what we know. I’ll use the current names, but will leave this note. Literally reading the kanji, it might be more appropriate to call them as such:

Extreme Evil(極悪): Literally ’Heinous’, but the prefix kanji can be read as ’very’ or ’extreme’. So depending on the reading it can be ’Very Evil’ or so on. The individual kanji are ’wicked/evil’ and ’evil’.

Great Evil(極悪): Literally ’Wicked’ but as an adjective can mean ’Extremely Bad/evil’, though the two kanji are ’wicked/evil’ and ’evil’.

???? Evil Lupu’s mistranslated Karma Value (凶悪): Literally ’Villainous’/’Fiendish’/’Atrocious’; based on that one line from Enri, I would go with ’Villainous’

Evil (悪): Literally ’Evil’ in some context, but can also be a ’Bad’ when used as an adjective or ’Bad Person’ alone if you read it as ’waru’ instead of ’aku’.

Extreme Good???: Whatever the +451 and up karma value will be called. 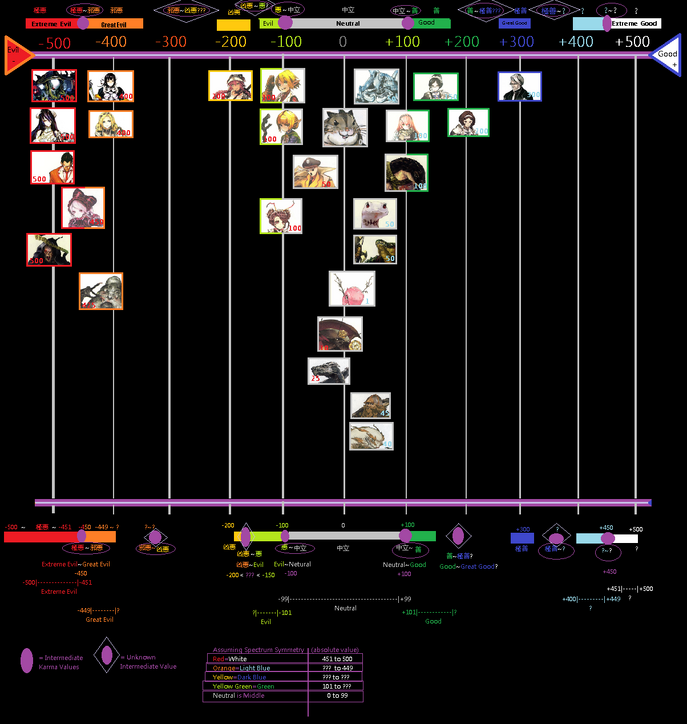 Retrieved from "https://grand-library-of-nazarick.fandom.com/wiki/Karma?oldid=407"
Community content is available under CC-BY-SA unless otherwise noted.